I love a good trick shot, and these trick shots captured by five-year-old Riley Dashwoood are very cool. The over-the-shoulder-DVD-into-the-tray is particularly impressive! What I love about the video description, however, is that it outlines how the shots were achieved. “Trick shot kid = persistence,” it says, followed by the attempts: 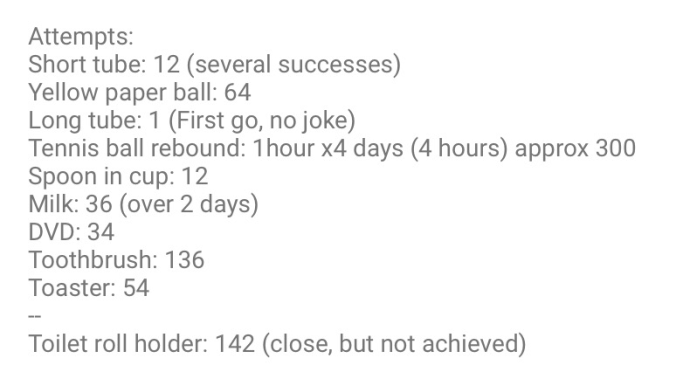 How to get a trick shot (source)

When edited together into a cute 30 second montage, the trick shots look amazing! But below the line, we see that it took a long long time to get that montage together. Throwing a toothbrush over your shoulder 136 times? No wonder she looks happy when it finally goes in!

Needless to say, Riley has spawned many imitators. This week I enjoyed this viral video as it popped up on my Twitter feed. Niall Brady was attempting to do a trick shot where he throws a spoon over his shoulder into a mug on the kitchen side. He made one attempt every day. It took him nearly a year:

There was certainly a big grin on my face as Niall enjoyed his moment of triumph, but I couldn’t help wondering – how many attempts would it take him to do it again? And how much practice would it take until he could do it consistently, time after time, almost without fail?

The fact is, if we want to get really good at something it’s not useful just to do it over and over again. Simple repetition does not necessarily help us to become experts. Take a tennis serve, a golf swing, or musical scales: if you’re using bad technique, practising them over and over again will only embed the bad habits and make them harder to break. What matters is the focus of that practice – the focus on developing the technique, on improving it, on making it better and better each time; the focus on what is called “high leverage practice” which makes an impact on performance.

There are some great examples of this in sport. Take David Beckham, practising free kicks again and again on the training ground so he can deliver when it counts on the pitch:

Although, watching that back, it’s amazing how many free kicks England got in that game – and how many he missed!

Alternatively, take this incredible catch in the NFL in America from another Beckham – Odell Beckham Jr:

The commentator says “you have to be kidding me! That is impossible. That is impossible.” And it does seem superhuman – until you realise that Odell Beckham Jr., like his English namesake, spends hours on the training pitch perfecting exactly that kind of catch, so he can do it seemingly with ease when it counts on the pitch.

What we see here it that it isn’t about a one-off fluke, but careful deliberate practice which enables talent to shine when the moment arises. If you asked Niall Brady to throw a spoon over his shoulder into a cup on demand, he’d probably fail. Throw an American football at Odell Beckham Jr., however, and he’d probably catch it, even with one hand tied behind his back.

The same principle is applied to the inspiring ﻿GiveIt100﻿ site, which invites people to share a short video every day as they practice a new skill for 100 days. There are some great examples on the site, including this one of a guitarist:

My final “practice makes perfect” video shows Jonny Wilkinson practising “stress kicks” in the south of France. “It’s very important,” Jonny says, “to make it more difficult…in training than it ever could be in a game.” That way, he’s ready in stressful situations, in the heat of the moment, to deliver crucial kicks – because he’s trained for it.

We can apply the same principle to all of our learning. If we’re going to get really good at things, it’s not enough just to turn up to school every day and sit in the classroom, going through the motions, coasting along. That’s the equivalent of throwing a spoon over your shoulder every day for a year. You might get lucky once or twice, but you haven’t really mastered anything. But if you apply yourself every day, focus your practice, push and challenge yourself to do better…when the whistle blows for the big game, you’ll be ready.

Happy practising!
In case you were wondering:

In American English 🇺🇸, “practice” is both a noun and a verb.

In British English 🇬🇧, “practice” is a noun, and “practise” is a verb.