On World Book Day this week, I was reflecting on the books that I have read and which one I would choose as the most significant – the book which made me. There is really only one choice: Collected Poems by Sylvia Plath. 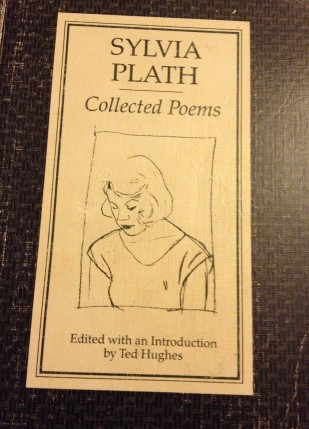 My copy of the Collected Poems

I can remember my first encounter with a Plath poem like it was yesterday. In actual fact, it was upstairs in a sixth form classroom when I was in Year 12, in the summer of 1992. One of my English teachers, Mr Rattue, presented us with two poems called “Daddy” and “Lady Lazarus”. Reading those poems was like an electric shock. I had never read anything like them before. The fury and fire in those lines blazed off the page and scorched themselves into my mind. I was dazzled by a poet who was an absolute mistress of her craft, writing about her personal trauma with almost clinical precision, without sacrificing any of the emotional content. The fiery-haired, powerful and terrifying voice of the poems mesmerised and enchanted me. After the lesson, I remember asking for more, and Mr Rattue lending me a copy of Plath’s collection Ariel from the English office. I was hooked.

My copy of The Bell Jar

I read more and more Plath, seizing on The Bell Jar next. I was bewitched by the imagery, the detachment of the narrator, the autobiography of it. I held on to Ariel, reading and re-reading the collection. I typed out “The Moon and the Yew Tree” on my Nan’s typewriter and kept in my wallet for years afterwards. I remember reading its steady, dead rhythms to calm myself before my university interviews. I still carry it with me, tattered now after many years, but intact.

Inside my copy of The Collected Poems

My copy of  The Collected Poems came later, in a really important week of milestones. After taking part in every school play and production going, I was awarded the Service to Drama prize for my work on lighting the school plays. This was the first time the prize had gone to a backstage performer rather than an actor that anyone could remember; I was incredibly proud to win it then, and it remains one of my proudest achievements. All school prizes were given as book tokens; we had to buy a book to be awarded at the ceremony. There was no question what I would choose. I remember the frustration of waiting the week from handing the book in to school, to being awarded it on Tuesday 15th December 1992. Wednesday to Saturday I was behind the lighting desk for Twelfth Night, our school play that year and the last one I was involved with. And on the Saturday afternoon of 19th December 1992, I got my acceptance letter from Oxford University.

Analysing Ariel: my university notes inside The Collected Poems

I took the Collected Poems with me, writing about Plath’s poetry in my first year and returning to it for my finals. In my teaching career I have taught The Bell Jar and Ariel as part of A-level English Literature. Whenever I return to the poems, even to write this post, the experience is as gripping, chilling and breathtaking as it was in 1992.

The Collected Poems is the book that made me because it is tied up so tightly with landmark experiences of my young adult life. The voice of the poems speaks so clearly, so personally, with such craft and skill, such poignancy and power, that I measure everything else I read against it – but nothing comes close.