Many people have written about the power of music to move us. For example, George Eliot wrote “there is no feeling that does not find relief in music”, whilst Martin Luther is reputed to have said “my heart, which is so full to overflowing, has often been so laced and refreshed by music when sick and weary.” My personal Headteacher hero, Albus Dumbledore, reflecting on a performance of the Hogwarts school song, was moved to tears in Harry Potter and the Philosopher’s Stone: “Ah, music,” he said, wiping his eyes, “A magic beyond all which we do here!

Lucy, Joe and Reuben at the Christmas Concert

At the Churchill Music! Young Musician of the Year competition at St John’s Church on Monday evening, I was moved beyond measure by the performances I heard. At the event, I shared my thoughts about the power of music in other ways. Firstly, playing a musical instrument actually improves your brain. A recent study by Nina Kraus of Northwestern University in America, for example, showed that “music training changes the course of adolescent brain development” leading to significant gains in literacy. The theory is that in learning an instrument, you are training your brain to hear subtle differences in sound, which reinforces and strengthens your ability to process language. An earlier study from Harvard University showed the “links between musical training and enhanced cognitive skills” – in particular the executive functions of our brain’s frontal lobe which “allow for planned, controlled behaviour” according to the study’s author, Nadine Gaab. There is a wealth of research that shows that learning and playing a musical instrument has a raft of benefits for brain function, learning and intelligence.

Another benefit to playing a musical instrument is that it teaches us the power of collaboration. Of course, we can sing and play alone, and solos can be hugely powerful, but music is meant to be shared. Even a soloist is usually accompanied, and anyone who has sung in a choir or played in a band or orchestra will tell you that the shared experience of making music together is unrivalled. The discipline of listening to one another, adjusting what you are doing to match those around you, shifting your own performance to contribute to the whole, teaches us so much about selflessness and teamwork, and how we are so much more together than the sum or our parts. 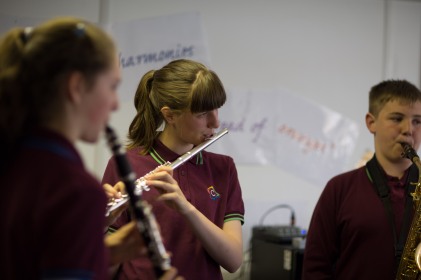 Playing together unleashes the power of music

The other great bonus to playing an instrument is the practice. I’m not sure if the performers will agree as they attempt three octaves of a C# minor arpeggio for the tenth time, but to get good – really good – at a musical instrument takes hours and hours of practice, day after day, week after week. The famous concert pianist Artur Rubenstein said “don’t tell me how talented you are; tell me how hard you work.” This was his way of articulating Stephen King’s notion that “the difference between a talented individual and a successful one is a lot of hard work.” The work ethic of learning a music instrument teaches discipline, dedication and determination which transfer to all other aspects of your life. It takes a lot of all three to get through those early, squeaky, scratchy stages to the bit where it starts to sound like music!

Finally, and perhaps most importantly, making music teaches you to feel. The wonder of a performance is that it brings the wood and metal of the instruments, and the space of the venue to life in an experience that only that audience and that performer will ever share. Musicians interpret dots and lines on a page, often written down hundreds of years ago in countries far from our own, and channel the emotions that those composers felt though themselves in a way which is unique, and all the more powerful for it.

In St John’s Church on Monday I was struck by the skill with which these talented young people were able to make an emotional connection through their instruments to the audience, transporting them through centuries and over miles to different places, different times. It was a privilege to be there and a lesson to us all to pick up an instrument and stick with it. It’s worth it.

A great evening at @ChurchillMusic1 Young Musician of the Year. Eight incredible finalists! Congrats to all. pic.twitter.com/iqr0Q0ODOY

4 thoughts on “The power of music”