We received requests for more than £1.5 billion for over 4,600 projects in this year’s round. Following our assessment of applications, we have announced £514 million for 1,556 projects at 1,299 academies and sixth-form colleges.

You can view the full list of successful projects at…

And, thankfully, our third phase bid was also successful – £750,000 to demolish the Tudor block and “make good” the footprint of the building. We aim to put car parking in its place, which we hope will improve the safety of our students and members of the community on the narrow roads around the Academy by reducing congestion from on-road parking. Planning is already in place, and we will be working hard with the contractors to minimise disruption and produce the best possible outcome from the works, which are due to be completed in the middle of 2019.

Part of the Tudor Building can be seen in the background of this, the earliest school photo we have found,  courtesy of alumnus Andrew Frappell who joined the school in 1958.

This is a landmark moment for the Academy. The Tudor Block was the first building to be constructed as part of the new secondary school for Churchill in 1956, and it has formed the core of the school’s facilities for many years. However, after 60 years in service it is no longer fit for purpose, and all of the classrooms from T1 onwards will be demolished. The current reception, offices, main hall and gym will remain intact.

This aerial shot from 1970 shows the original Tudor block in the right of the picture.

The removal of this building will mean a change of shape to the site, and we will be working hard over the coming year to review and redevelop our provision to accommodate this new emphasis. It’s an exciting time, and the culmination of a lot of work from a huge team of people. Particular thanks are due to Deputy Headteacher Mark Branch, who has coordinated and led the third phase of the project with great skill – and will continue to do so as the demolition progresses. 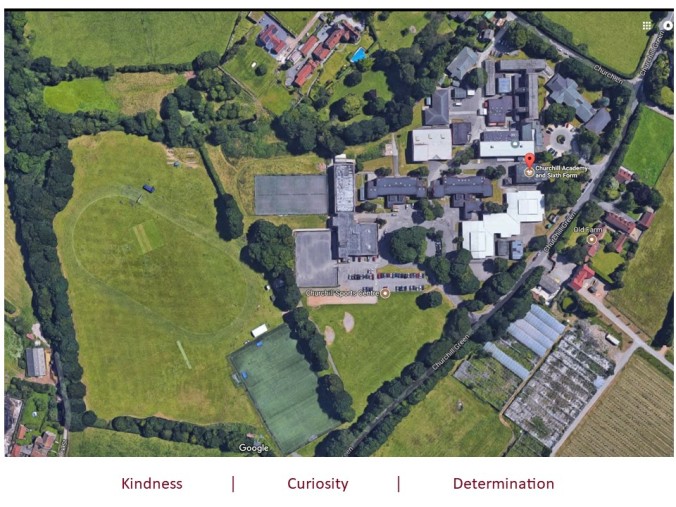 Satellite picture of our site captured in 2016, prior to commencement of the three-phase project. The Tudor block is the T-shaped building towards the top of the picture.

2 thoughts on “Pass me the wrecking ball!”